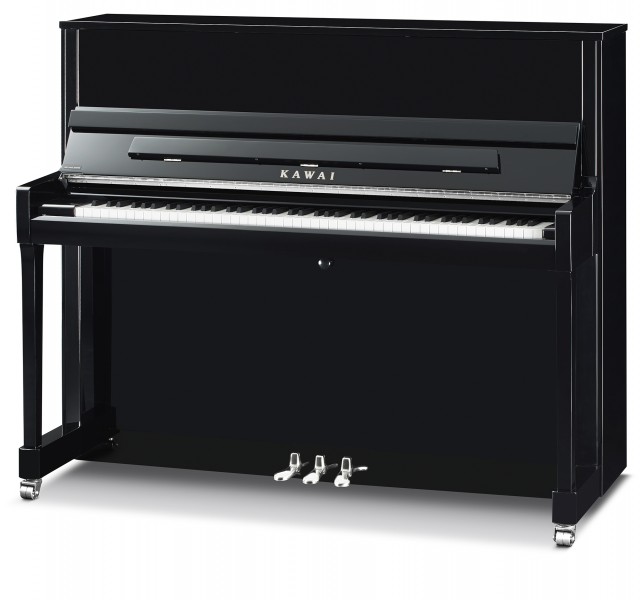 At the benchmark size of 122cm tall, the Kawai K-300 is a great choice for the home or school practice room. Equipped with the acclaimed Millennium III ABS-Carbon action the K-300 is a responsive and very capable instrument that will satisfy the whole family.

An ideal choice for intermediate players, the K-300 is constructed from high quality components throughout including a solid spruce soundboard along with luxurious touches such as a soft close lid.

Like the Yamaha b3, the K-300 is produced at Kawai's factory in Indonesia which enables them to produce a high quality instrument at a very competitive price point.

This piano was purchased new in 2014 and has been well looked after by its sole domestic owner, coming to us recently in part exchange./p> Dominic Barnett – Chamberlain Pianos

The soundboard and ribs are considered the most important sound producing components of a piano, with both the materials used and the manner in which they are assembled greatly affecting volume and tonal quality. The K-300 soundboard is produced using the finest quality straight-grained spruce, carefully selected and scientifically tested to exceed KAWAI’s demanding resonance standards, ensuring exceptional dynamic range and outstanding tonal balance across the entire sound spectrum.

The K-300 features the specially developed Millennium III ABS-Carbon upright piano action, combining carbon fibre with ABS to produce a lightweight yet incredibly strong and reliable mechanism. To improve the action’s climatic stability, KAWAI pioneered the use of aluminium action rails, aluminium hammer rest rails and ABS action parts – addressing many of the problems associated with wooden components, such as breakage under continual high stress, and shrinking/swelling due to changes in temperature and humidity.

With attractive traditional style cabinety and a soft closing fallboard, the K-300 is equally suited to the home environment and school practice room.