Making a grand piano: 2. The soundboard The soundboard is very much at the heart of the piano - the striking of the strings causes this to vibrate and it is this component that amplifies the sound. The soundboard is a thin wooden sheet made from carefully selected Sitka spruce or Japanese spruce. Prior to selection, milling and assembly, the wooden planks are air-dried and kiln-dried to a decimal point specific level of moisture content. Many small planks are glued together edge-to-edge to form one large sheet, which is then cut into the desired shape and planed down to the correct thickness. It is then seasoned to match the climatic conditions of the region of the world for which the finished piano is intended.

Ribs are then glued to the underside of the soundboard, in a direction perpendicular to the grain of the individual boards in the soundboard. This is done so that the sound vibrations are transmitted uniformly throughout the whole soundboard, and serves to reinforce and stiffen the soundboard, which is weak horizontally. The long bridge and the short bridge are attached to the side opposite of the ribs. 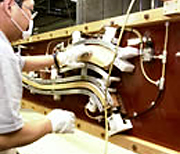 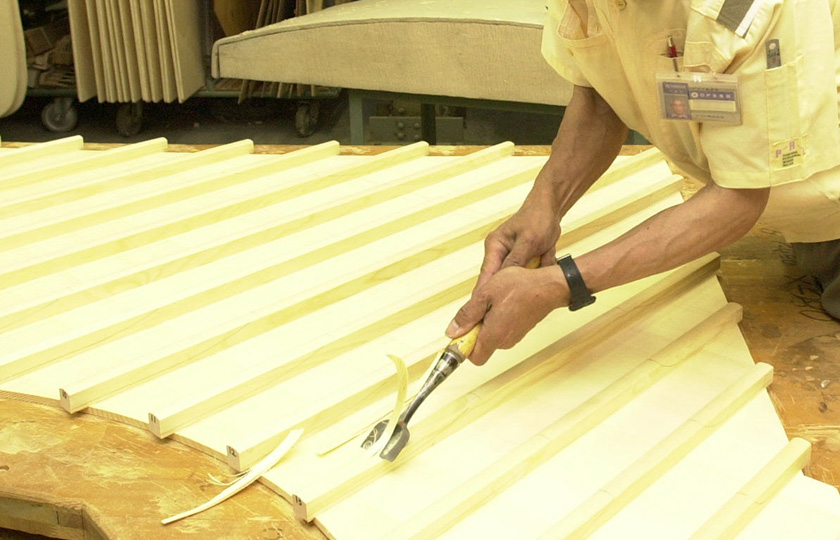 The frame of a Yamaha piano is made from cast iron mixed with some additional metals, selected for their acoustic properties. Frames for the CX, GB, GC and SX series Yamaha grands are what are known as V-Pro plates, meaning that they are vacuum cast to remove air bubbles and to ensure maximum rigidity, also making sure that each plate is perfectly cast.

The metal for CF series frames is hand poured and once it has hardened the plates are finished by hand. This is done for its tonal properties; the alloy mix is different (and top secret!) while core of the metal is softer to give the piano an additional depth and resonance. A grand piano frame can weigh anywhere between 100 and 150 kg. Once the finished soundboard is set in place on the inner rim and the metal frame attached, the piano is almost complete.