What is a TransAcoustic Piano?

Yamaha, having pioneered the art of manufacturing a Silent Piano, realised that wearing headphones to practice the piano quietly or privately is not always convenient. Sometimes there may be a teacher or a duet partner to consider, or a parent wishing to make sure that their child is doing their piano practice! Yamaha’s engineers came up with a clever system which enables you to turn down the volume of your piano without the need for headphones, and thus the TransAcoustic piano was born!

How does it work?

Now in its second generation (TA2) the TransAcoustic system utilises the same ‘hammer stop rail’ mechanism as the Yamaha SC2 and SH2 Silent pianos, which prevents the piano’s hammers from striking the strings and producing a note. Sensors within the keyboard and action mechanism then trigger digital samples which are then transmitted electronically. However, rather than sending the signal straight to the headphone socket, the TransAcoustic system has clever transducers affixed to the soundboard of the piano which causes it to vibrate and effectively turns the whole piano into a loudspeaker.

As the sound is produced electronically and merely amplified by the soundboard, you can turn the volume down or even play using the other instrument samples. There are so many possibilities, for example you can play your TransAcoustic piano in acoustic piano mode, with the digital strings sound over the top for added ambience. When playing in quiet mode with the acoustic piano ‘switched off’, the vibrations of the soundboard are transmitted through the bridges and then back to the strings, giving even the digital piano sound wonderful acoustic resonance, unmatched by any digital piano, even the very top of the range models. 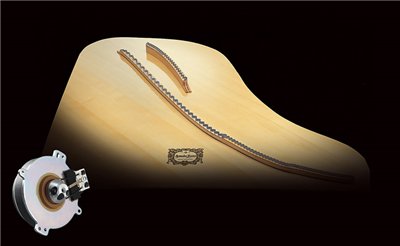 Can I plug headphones into it too?

The TransAcoustic piano has a Silent mode too, simply plug in some headphones and it becomes a SH2 Silent piano, and offers the same great functionality including Bluetooth for wireless audio streaming and smart device compatibility, a USB audio recorder and 19 great instrument voices.

For the SH2 Silent mode Yamaha has utilised advanced binaural sampling technology when capturing the sound of the CFX concert grand, using specialised microphones that capture locational information and other nuances discerned by the human ear. The resulting sound is so natural, so enveloping, that you’ll soon forget you’re even wearing headphones at all. Yamaha’s Virtual Resonance Modelling technology (VRM) recreates the distinctive reverberation and resonance of the grand piano.

It cleverly calculates the various states of the strings for each of the 88 notes on the keyboard, from one instant to the next, along with the timing and depth of pedalling. VRM also calculates aliquot resonance in the upper octaves, along with the full resonance of the soundboard, rim, and frame. This technology allows for vivid, bright, richly varied expression that reflects the limitless number of factors inherent in piano performance.

What pianos are available with TransAcoustic2?

An example of the latest TransAcoustic TA2 system is always on display and ready to try at our Haslemere showroom.